If you’ve never worked with theatre projections before, or if you’ve never rented third-party content, don’t worry.  The process is not overly complicated.  Thousands of middle schools, community theatres, and children’s groups have successfully navigated the process to using projections, and so can you!  We’re here to help, and if you have any questions along the way, please feel free to give us a call!

We’ve included a few pages of information below, to help you understand the process of renting theatre projections.  Even if you don’t currently have a projection system for your theatre, we can help you through the process of setting one up, with either purchased or rented equipment.

First, a quick note about what we provide in this process. We rent the video content that is projected in your theatre space on your projection system. This content comes to you as a set of individual video files, each one corresponding to a particular video cue. These video files are uploaded to an online folder to which you have access using a private link. You can download these files directly to the computer (or computers) that you are using to control your theatre projection cues. Because we transmit the video files online, there is no time wasted in waiting for shipment of materials. You can be up and running quickly, which is important for theatrical productions where time is always an issue.

Setting Up A New Projection System 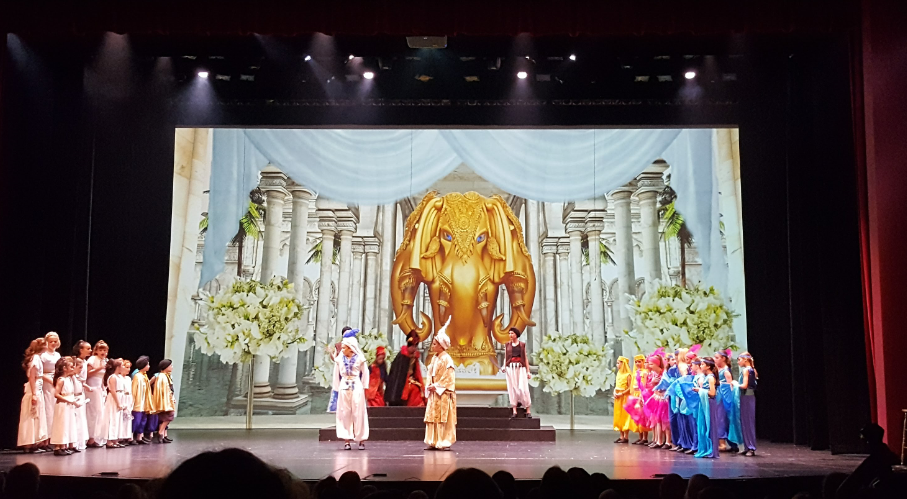 Setting up a new projection system in a theatre may seem a daunting task at first, but you do not need to hire a technical specialist to make projections work for you. There are many resources available to help the non-technical (or moderately-technical) theatre professional figure out a configuration that works for a given space.

The first recommendation we would make to any would-be projectionist: give yourself plenty of time. Testing different projector models, lenses, and projector placement takes time, and there is no one-size-fits all approach for every theatre. Start by trying something! There is no substitute for tinkering. Your first approach may not be perfect, but you may learn things that can improve your look on Round 2.

While it is true that there are no hard and fast rules for designing projection systems, there are a few rules-of-thumb that can be helpful. We’ve tried to identify a few of these in the following topics to help you get started. Read on....

Constructed walls can also work, although any imperfections in the surface’s flatness tend to be highlighted by a projector’s light (by casting tiny shadows). At the high end, you can purchase or rent (e.g., from RoseBrand.com) a fabric screen specifically designed to reflect projected images, but these tend to be fairly expensive. If you want to use rear projection, you’ll need the projector’s light to be able to feed through the projection screen; stretched spandex works great for this purpose.

First, brightness. This is the single-most important feature to look for. My rule of thumb is to buy, rent, or borrow the brightest projector you can afford (which works in your space). Theatrical projections tend to have to compete with a bunch of other stage lighting, so in order to see the projections, you’ll want your projector to be as bright as possible. Brightness of projectors is measured in lumens. A small venue (150 seats) may get by with a 3,000 to 5,000 lumen projector, while a mid-size theatre (250 seats) will probably need at least 5,000 to 6,000 lumens. Larger venues might need a 10k projector, or even brighter.

The second feature to look for is the right lens ratio. This affects the size of the projected image at a given distance from the projector. I’ll talk more about lens ratio below.

The third feature to consider is the resolution of the projector, but I think this is the least important of the three. Two very common projector resolutions include XGA, 1024 x 768 (4:3), and Full HD, 1920 x 1080 (16:9). Either of these resolutions will probably work for you, but if you want to incorporate full HD images in your show, opt for the higher resolution.

If you are just starting out, it may be worth consulting a local projector vendor – they will often be willing to look at your space at no charge, and give you a technical recommendation that works for you. Or simply rent a projector for a day, and see how things look using different projector mounting positions. There is no substitute for tinkering!

There is always a trade-off between being close enough to the projection screen so as to avoid shadows, and being far enough away to get a large enough image. Here’s where the projector lens comes into play. The lens ratio is simply the distance from the projector to the screen (D) divided by the width of the projected image (W). Some projectors are specifically designed to project a fairly large image without having to be placed far away – these are called short-throw projectors, and they typically have lens ratios less than 1.0. Lens ratios of around 0.6 are fairly easy to find (and rent); more recently ratios as low as 0.3 have become available. These short throw lenses work great for theatrical projection applications, though they can be a bit more expensive than projectors that have more standard lenses.

If you have plenty of room behind your projection surface (many theatres don’t), you can try rear projection. That requires a different type of projection screen, but is an easy way to avoid shadowing.

Stage lighting is best achieved by aiming instruments more sharply down closer to the stage, or by using light trees in the wing space. Instruments that are located in the back of the theatre and aimed toward the stage for general lighting tend to wash out projected images – try to avoid those if possible. Usually some experimentation with find the right balance of projection and stage lighting.

Projected images give your lighting designer a new dimension to play with, and can be used in some novel ways. Sometimes the transition to a new scene looks really nice with the stage lighting all dimmed out, putting the actors onstage in silhouette in front of a projected image; bringing up the general stage lights after the location has been established with projections can be an effective technique. Play around with the possibilities! 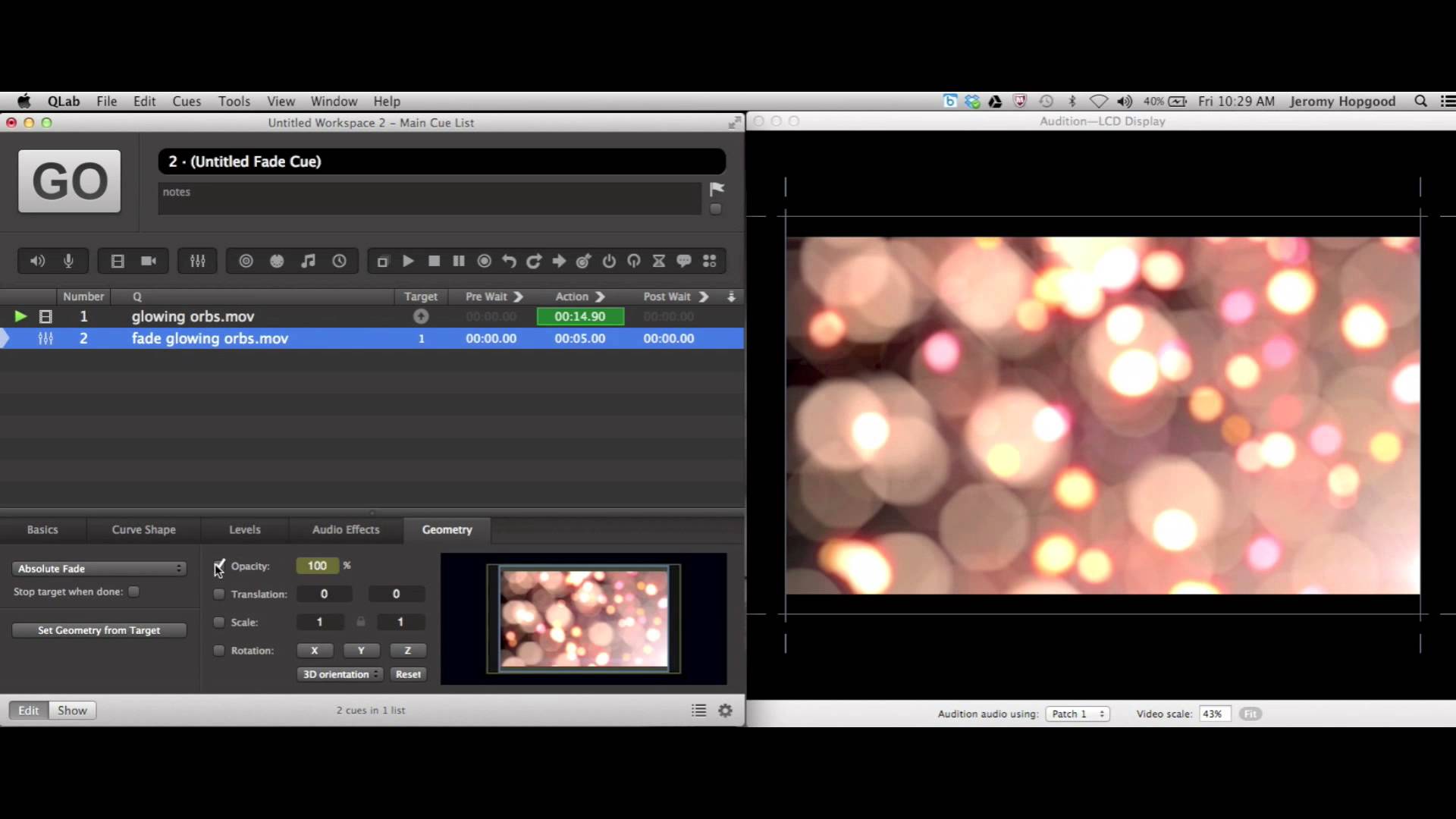 Your projector will need to be connected to some kind of a computer system, typically a laptop, to control what is shown on stage, at the appropriate time. Many types of software are available for this purpose, from the very simple and inexpensive, to the complex and costly. On the lower end, many theatres simply put their images and videos into a presentation software, like Powerpoint, or Keynote, and control the show cues much like transitioning between slides in a business meeting. These programs are widely available, and they work well for transitioning between a series of static scenes. They handle video somewhat less effectively; PowerPoint, for example, tends to be a bit glitchy when trying to handle video loops.

For a bit more technical sophistication and control, Qlab (available for Mac computers) is probably the most commonly used cueing software. It can handle cross-fades between images, looping videos, and sound cues as well (if syncing your video and audio is important). It also can handle multiple projectors, as long as your computer system is powerful enough to play multiple videos simultaneously. Qlab is expensive to purchase outright, but you can purchase a license on a day-to-day basis, to keep your costs down. A trial version is available for download at no cost. Playback Pro, another Mac option, offers similar capabilities, is especially good for live events, and also offers a free trial version.

On the PC side, ProPresenter is a popular option, originally designed for video screens used in church worship services. Similar to Qlab, ProPresenter can handle a variety of video and sound cues, though no daily licensing options are available, making this a more costly up-front investment. Video Projection Tool (VPT) is a powerful PC option, and is completely free, although not as user friendly as other software. Show Cue Systems, also for PC, can integrate both video and sound cues, and also offers a free trial version, though this software doesn’t handle video crossfades as well as other products.

After you’ve successfully set up your projection system, you’re still going to need some content to play. You can get that from a variety of sources. If you have an artistic bent, you can create your own images, and use those as your background scenery. Kids’ theatre groups might have fun designing their own backdrops. If you’d rather purchase than create your own, there are an increasing number of internet sites which will rent you still images and animated effects designed specifically for the show you are working on.

In the shameless plug category, I am one of those content providers! If you need something, just ask! If I don’t have it in stock, I may be able to create it for you. You can find me at www.rickfrendt.net.

Above all, have fun and be creative using projections as a new lighting and design tool. The possibilities are infinite!